This programme presents in this section recorded oral stories about St. Luke’s by members, provide some background on certain artifacts in the church that have been donated over the years, and highlights old photographs and memorabilia about St. Luke’s that members find in their drawers and photo albums.

St. Luke’s Magnificent Stained Glass Windows
St. Luke’s has three magnificent stained glass windows each representing a specific theme.  Over the years, all three were donated in the memory of different members of the Haines family.  Thanks to Rev. Trevor Jones and Ken Durham for their comments.

The window on the left above is representative of the region and its abundance.  It shows the streams and rivers, grapes, wheat, fruit trees and rocks representing the Niagara Escarpment. The window is located on the north side of the church.  It was donated around 1980 in memory of Rev. Canon Richard Haines (St. Luke’s minister from 1951 until 1963 and who died in 1977 and is buried in St. Luke’s Cemetery) and his wife Jean H. Fechnay by Richard (his son) and Margaret Haines.

The window in the middle, located on the south side of the church, above is a pictorial representation of Manitoulin Island where Rev. Canon Richard Haines first served as a minister.  The church building represents St. Luke’s when it was founded – no houses around it – a pioneer church.  It was donated in the early 1980’s in the memory of John Henry Elliott and his wife, Margaret Jane Horseman, the father and mother of Margaret Haines (nee Elliott).

The window on the right above represents the Emmaus story in Luke 24: v13: “They knew him in the breaking of the bread” as we meet Him and know Him in the Eucharist. This window is located on the north side and is the last window on the left as one passes on their journey to the altar rail to take communion.  The window was donated in 2006 from a legacy left by Margaret Haines (who died in 2003 and is buried in St. Luke’s Cemetery) by her sister Elizabeth Stoehr. 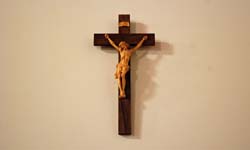 St. Luke’s Crucifix and Sanctuary Lamp
Ever wonder about some of the artifacts in our church?  I asked around about the crucifix on the north wall overlooking the sanctuary.  It turns out that Betty Houser had a story about it and some information about the sanctuary lamp.

In Betty’s own words, she said:

“I joined St. Luke’s about 1987 when I moved to Smithville from Hamilton to be near my daughter Vivienne and her family. Vivienne was a member of St. Luke’s so I joined and I immediately loved it and the people.

“I used to make the cakes at some of the events at the church such as the Halloween party and other special events.  When I was younger I used to decorate cakes for a hobby and made a little money doing it as well.  I also taught others how to decorate cakes.   When St. Luke’s had its 100th anniversary in 1985 I made the cake for the big event (held in October).  I never took pictures of my cakes, I should have.  Maybe somebody has a photo of that cake but I don’t.

“Around 1984, there was a group of girls (Michelle Anderson, Krista Wilson, Stacey Wilson, Becky Gannan, Jennifer Hunter, Stacey Oakes) who were getting into their early teens and they were getting too old to come to Sunday school.  Cheryl Gannan and Pat Wilson, who headed up the Sunday school, asked me if I would take those girls and work with them and teach them so they could continue on in Sunday school.  I was apprehensive at first because I had never taught Sunday school but I agreed because I felt I could teach them about Christian living and values.

“One of the activities we did was learn about baking since I had a passion for it.  I would have them over to my house a few times to practice making Belgian cookies and lemon squares and other items and generally learn how to bake things.  The girls started thinking that they could raise some money from their baking.  So once a month or so whatever we baked at my house on a Saturday became the goodies for the coffee hour the next day after the service.  We would put a basket at the end of the table and people could donate some money for the treats.  It was getting close to Christmas and the girls wanted to donate fruit for the fruit baskets that Community Care prepared for those in need in the community.  So the money raised was used to buy apples, oranges etc. to go into the fruit baskets.  The girls were so pleased that they were able to do that.

“In early 1985, the girls and I decided we wanted to raise some money for something nice for the church to commemorate the 100th anniversary. So we continued on with our baking for the coffee hours.  But not every coffee hour, maybe just one a month or two times a month.  The girls also put the food and coffee out and they even cleaned up afterwards.  It was all their idea.  I just agreed and helped them learn their baking.

“Roger Forrester the rector at the time suggested that a crucifix for the wall overlooking the sanctuary would be an appropriate item to acquire.  He arranged to get it.  There was some extra money left over, so Roger suggested a sanctuary candle. Someone else donated some funds for that as well, but I just can’t remember who.  I guess a plaque should have been done to explain the crucifix, but it wasn’t.  There was some sort of dedication done at the time.” 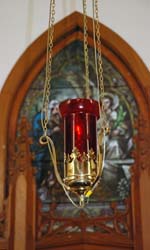 With regards to the sanctuary lamp, the one acquired in 1985, with the help of the girls Sunday School fundraising efforts, had a wick which was lit with the taper each Sunday before the service and then extinguished afterwards.   It was difficult to do because someone had to stand on a chair and it took a bit of effort.  So sometime in the mid-1990’s Jack Tylee requested that an electric candle with a switch be used rather than a wick.

Rev. Ellie was asked the significance of a sanctuary lamp.  She replied:

“A sanctuary lamp or altar lamp represents the presence of everlasting light or an eternal flame that shines before the altar of sanctuaries in many denominations of (Jewish) and (Christian) places of worship. As prescribed in Exodus 27:20-21 of the Hebrew Bible, this icon has taken on different meanings in each of the religions that have adopted it. The passage, which refers to prescriptions for the tabernacle, states:

And thou shalt command the children of Israel, that they bring thee pure oil olive beaten for the light, to cause the lamp to burn always. In the tabernacle of the congregation without the veil, which is before the testimony, Aaron and his sons shall order it from evening to morning before the LORD: it shall be a statute for ever unto their generations on the behalf of the children of Israel. (KJV)

“These lights are never (supposed to be ) allowed to dim or go out, and in the case of electric problems, alternate emergency energy sources are used to prevent it from diminishing. Though once fueled by oil, most today are electric lights. Some Anglican churches would never turn that light out. Some have an oil lamp that is kept keep lit (it’s safe, and is manufactured for this purpose). We should look into somehow wiring the sanctuary lamp on a separate switch.”

So if you were wondering about the crucifix and sanctuary lamp, now you know.

Therefore, if anyone is in Christ, the new creation has come: The old has gone, the new is here!

We're currently offline. Send us an email and we'll get back to you, asap.